Current images of fusor efforts, components, etc. Try to continuously update from your name, a current photo using edit function. Title post with your name once only. Change image and text as needed. See first posting for details.
Post Reply
10 posts • Page 1 of 1

Turns out I can't edit title/first post of my old Images du Jour posts anymore so I'll make this general and continuous.

I've been playing around with channel electron multipliers recently, as mentioned in other, scattered threads, but finally I've gotten good performance out of them!

The trick was getting the proper preamplifiers, and a 60 MHz DSO to actually see fast output pulses.


in another tee coupled in the electron path, is a soviet VEU-6 CEM, with a grounded entrance, and an anode voltage of 2500V. the AC coupled signal out (1nF) is directly amplified by an Ortec VT120C x20 noninverting "fast" timing preamplifier. The signal is then fed to an oscilloscope terminated in 50 ohm.

The system is connected to my main high vac system by bellows hose, and the system pumped down to ~2x10^-7 Torr. As seen from the scope pics, the gain and signal shape is pretty good, peaks being roughly 40 ns wide and 500 mV high.

My plan is to modify another CEM to act as electron source (remove anode), to ionize gasses, put a drift tube inbetween and use the delta-T between the two channeltrons for TOF-MS and residual gas analysis. This idea was successfully, yet uncommercially implemented by Bendix in the late 60's
Top

I have been researching waxes for vacuum seals between glass/metal and metal/metal for a while.

Melt the beeswax and dissolve the colophony into it gradually, add venetian red last and stir until homogenous. I needed around 130-140 degrees to melt it all to be fluid enough to pour, heated on a hot plate in a stainless ladle resting in a sand bath.
Poured into long thin strips for easy application.


Sealing joins: heat sealing surfaces with micro torch, apply wax on both surfaces, push together and reheat. Rotate and piston the joint slightly to make sure the wax flows.


I have yet to test this in a vacuum but it made a beautiful seal between borosilicate glass and copper, see attached.

This wax, or a very similar one has been used for particle physics as late as the 1930s, particularly present on Lawrence's 4"cyclotron: 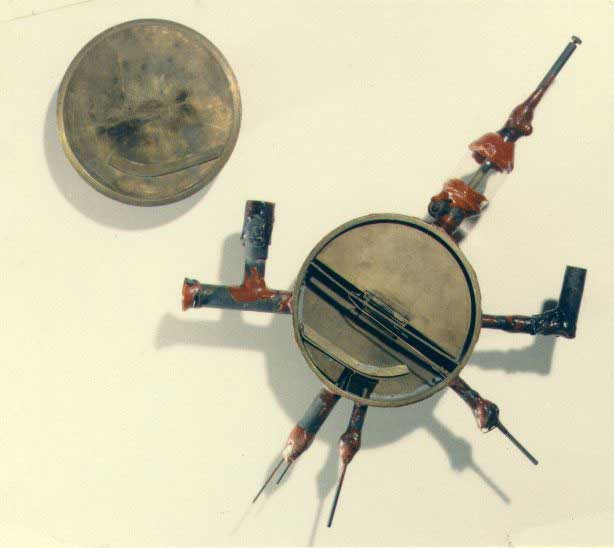 I will be back with more info when I get it. My hope is to be able to seal BNC connectors into a vacuum flange.
Top

This iron oxide read color and copper tubing gives a beautiful vintage look. I'm very interested in the results. I'm using the wax-rosin 1:1 in many applications, but the 40ºC melting point is sometimes no-go. If the Faraday Wax can hold up to some 70-80ºC that may become my new favorite!
“Begin at the beginning," the King said, very gravely, "and go on till you come to the end: then stop.” ― Lewis Carroll, Alice in Wonderland
Top

I initially thought the iron oxide was mainly for pigmentation, but the consistency of the molten wax changed substantially upon addition.

Is the 1:1 wax serviceable in high vacuum as well?
Top

Yes the 1:1 wax is good down to 1e-6 Torr and very easy to work. I like especially that it can be wiped clean form the disassembled parts after heating with the SMD hot air blower.
“Begin at the beginning," the King said, very gravely, "and go on till you come to the end: then stop.” ― Lewis Carroll, Alice in Wonderland
Top

That's definitely an advantage. Perhaps I should make a batch of that as well.
the 1:5 wax is slightly pliable at room temperature, but fractures if snapped. It is rigid enough that pulling straight on the glass/copper joint would not let it pull out.

If the 1:1 wax allows pressures down to 10^-6 torr, one could hope that the lesser content of beeswax in the 1:5 would behave slightly better. I assume that beeswax is the more volatile of the two constituents.

I will say, Torr seal and Hysol 1C might beat this wax in mechanical strenght, outgassing and machinability, but they CERTAINLY don't smell as nice as hot beeswax/rosin does!
Top

I made a small brass cover for a bored out feedthrough, to test the wax at vacuum.

With a 2L chamber on top of a EXT255H, connected to the test flange by bellows hose, the pump spins up in less than a minute, and pressure goes down to 8×10^-7 in less than 5. Power consumption the same as I usually see.

In conclusion, whatever effect the wax has on vacuum performance is below what I can measure. I am quite happy.

I never get below 5x10^-7 anyway, as I cant let it run continuously for days, and it's a non bakeable system.

An RGA would be nice to quantify the organic portion of the residual gasses in the chamber and compare.

Great report on the waxes! I bought and still have the $125 block of apiezon black wax I bought in the late 90's. I used it on some small discharge tubes back then and it worked great, but only used a mechanical pump then. I think the wax was rated to 10e-6 torr if memory serves. I love the red wax. If what you are doing will not heat at all or to only a miniscule degree, wax avoids a lot of expensive mechanical assembly flanges and components in test vacuum arrangements.

Thank you for the interest!

Bringing back a bit of experimental physics history feels nice.

I have just mounted a non-vacuum BNC of "decent" quality in a KF25 flange, only sealed with the Faraday wax. The teflon insulator gap is also sealed.

It seals as well as previous tests would indicate, thus providing a very cheap route to hermetic feedthroughs!
10^-6 torr in less than 2 mins from turbo spinup!

I made the seal, tightened the bolt down, then reheated the seal as the bolt undoubtedly cracked the seal.

I put a simple faraday cup on the end just to pretend I might use it for something someday...

I love the funny bit with the Faraday cup handle... Nice work. carry on. A bit of history and humor are always held in high regard here.

Richard Hull
Progress may have been a good thing once, but it just went on too long. - Yogi Berra
Fusion is the energy of the future....and it always will be
Retired now...Doing only what I want and not what I should...every day is a saturday.
Top
Post Reply
10 posts • Page 1 of 1