Current images of fusor efforts, components, etc. Try to continuously update from your name, a current photo using edit function. Title post with your name once only. Change image and text as needed. See first posting for details.
Post Reply
6 posts • Page 1 of 1

This is yet another demonstration of why fusor chambers should not be made of glass or other brittle materials. It may also serve as a warning for those building small chambers based on 2.75" conflat systems.

I have a 2.75" conflat 6-way chamber with two viewports, one on axis with a graphite and tungsten cylindrical grid and the other perpendicular to it. The grid is oriented such that ion beams emanating from the gaps hit stainless steel, but in my recent fusion runs a problem has arisen.

I use a threaded rod to connect the grid (the graphite is threaded) to the feedthrough and the assembly hangs upside down. After I pumped the chamber down the grid rotated slightly, but to a position where another grid wire was positioned before the viewport. It was a warning of things to come. Early on several ion beams were visible on camera but these eventually reduced to two very bright beams on axis with the viewport. The grid had rotated at least three times was about 2mm further from the insulator stalk. I suspect thermal cycling is the culprit. Since graphite is self-lubricating it takes very, very little force to move the grid in the direction gravity likes. I did not, however, realize that the grid had rotated this much while I was fusing. Everything is covered in a lead vest and the camera (of poor quality) is on axis with the grid, so there was no way to tell where the wires were.

After about an hour and a half of fusing and conditioning the chamber I heard a loud pop, not unlike some short capacitive arc discharge. I've been having some arcing difficulties, but the pressure gauge told a different story, as did the smell of burning plastic. I quickly tripped the HV, isolated the turbo pump, and poked around the fusor until I removed the lead vest, revealing the culprit. The off-axis viewport was badly cracked and had luckily not imploded. The turbo pump would not have liked that. 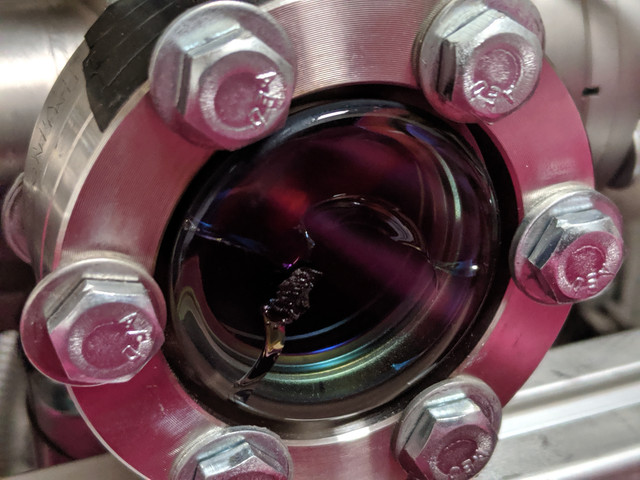 The cracked viewport right after failure and still bolted to the chamber.

The chamber was ~100C but the viewport was much hotter, my guess was >150C. By the time I could get an IR thermometer everything had cooled down significantly. Upon closer inspection, I realized the gap between the grid wires pointed right to the epicenter of failure. The ion beam cooked the viewport and caused significant thermal stress until it finally gave up the ghost. My lead vest burned exclusively at the ion beam spot despite being in direct contact with all the glass and the flange. It is a testament to the locality of the heating. 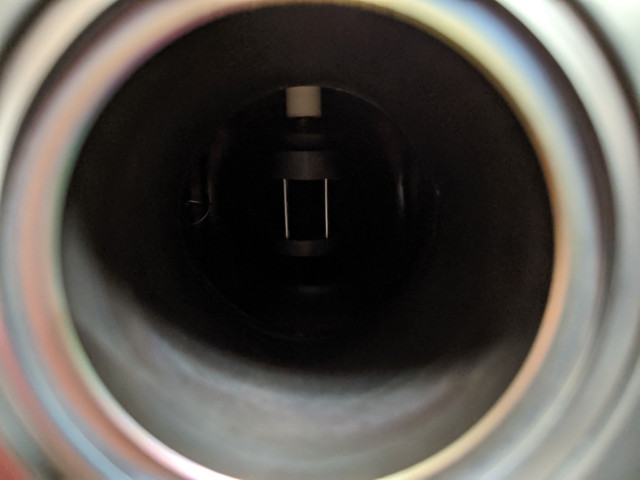 Had the chamber been fully glass the grid spinning out of alignment would not have mattered. A bell jar would stand little chance, especially at high power since I was running at <100W. The failure could have been ex(im)plosive, but I got off lucky. Sacrificial glass is on order and grid construction is also up for revision. While my ion beam was uncannily focused, people with small chambers based on 2.75" crosses, tees, etc... might want to consider sacrificial glass since the viewport is so close to the action. Magnet deflectors (look up Andrew Seltzman's work) might also do the trick. 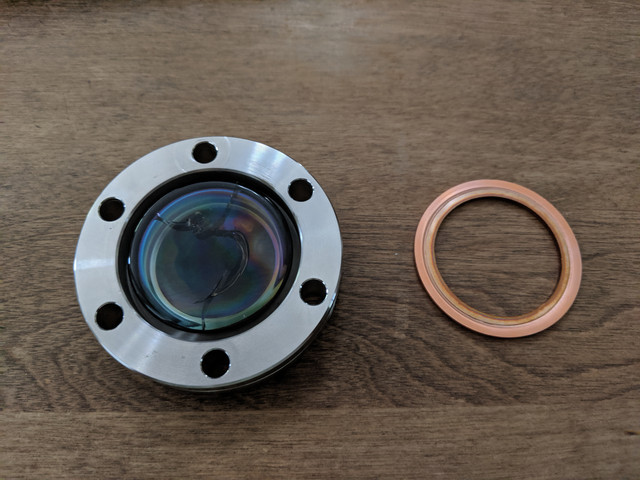 Hi Liam,
That's an unfortunate mess but I'm glad you were using a turbo pump instead of a dp. Rapid vacuum loss with my system could prove to be a dangerous condition.

It's concerning how thin those windows are (I think were using the same model). I may go back to my shop made 1/4" viewports if I encounter something similar.

No doubt you'll patch this up in no time and get back to fusing!

The grid rotation is interesting. I wonder if gravity wasn't the only influence. Years ago, a partial grid rotation occured in my son's fusor that was definitely not gravity. In his case we believe it was em forces.
Top

We all love to see that star...After all what's a view port for??!! I learned some time back, and have in many past posts, advised to align a grid wire to, sadly, block direct imaging of the star by putting a wire in the way. Thus, no ion streamers impact the glass. Yes, I get deposition, but no ion/electron beam hot spots.

I also make a double nut lock down on the threaded grid stalk. Almost certainly thermal expansion/contraction cycling and not EM forces will rotate a grid structure. "Amp Turns" create EM forces 10ma on single turns = 10 milliGauss... Not much force there. Thus, my thoughts on thermal cycling of grid wires or loose threads on the grid via the same action. I doubt if anyone dynamically spin balances their grids.

Sorry 'bout the view port. They ain't cheap or easy to come by in vacuum warranted surplus buys.

See my blocked star image below

Progress may have been a good thing once, but it just went on too long. - Yogi Berra
Fusion is the energy of the future....and it always will be
Retired now...Doing only what I want and not what I should...every day is a saturday.
Top

The turbo's fine as it was at 66% speed and the inrush was only to ~10 torr. I isolated it immediately after noticing the problem and didn't know whether the viewport would still implode. The viewport has since been replaced with a blank and I have again done fusion, but I added some magnets on the second viewport to deflect ions and kept the runs much shorter. The chamber and viewport still get hot, but the viewport can handle 400C and there is no localized ion beam heating and thus not nearly as much thermal stress. Nevertheless, I see sacrificial glass in my future, though I will first add forced air cooling and redesign the lead shielding. The lead vest I'm using effectively blocks all the x-rays, but it acts as a thermal blanket as well. If my ion chamber (calibration not verified as it's from Ebay and I don't have the appropriate check sources) is to be believed, the viewports spew ~2rem/hr worth of x-rays out of any unshielded viewports in the 25kV 5mA range. Thus shielding is a must.
Top
Post Reply
6 posts • Page 1 of 1